All about my Pottery 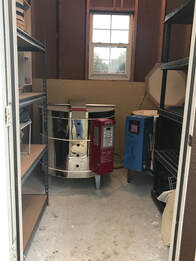 Materials:   Most of the cross bodies are made out of various clay stoneware, i.e., White stoneware, Speckled Buff, Buffalo Wallow, etc., to mention a few.  The flowers are often made out of clay such as porcelain, T Mix,  B Mix, or other stoneware clays.

Process:  Once a cross is designed and handmade out of clay, it takes several days for it to become leather hard and totally dry. Larger items like bowls and leaves often take weeks to dry, depending on the humidity and weather.

​Bisque Firing:  After it is dry, it is bisque fired in an electric kiln to approximately 1945 degrees. This usually takes 12 to 14 hours; with an additional 12 hours to slowly cool down.  Items are then glazed and re-fired at approximately 2145 degrees, which usually takes another 12-14 hours followed by a slow cool down of the same time.  Some items may require an additional glaze firing, depending on the glaze technique being used. This would be fired in an electric kiln. 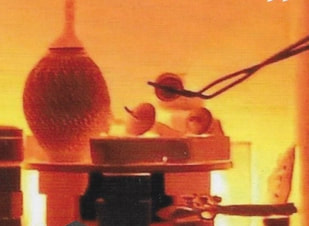 ​Raku Firing:
About 6 times a year, a group of potters will get together and Raku fire outside.   Raku, as practiced in the West, is a low-fire method in which we quickly heat the ware, remove the ware from the kiln when the glaze has melted, and perform some type of post-firing process to the piece. Western-style Raku firing differs from normal firing as it uses a low-fire method that means the ceramic piece isheated very quickly. The unpredictability of the outcome is something that attracts many potters to this method. Typically western Raku is made from stoneware and heated to around
1,650 °F. The post-firing phase isusually an immersion in an organic combustible material, such as shredded newspaper, sawdust, cardboard,dried leaves,etc.,  to affect the final outcome on theglaze and the raw clay. Deciding when the glaze hasmelted takes practice and is bestdone by observation, though many potters use pyrometers toaid in making that decision. Raku is exciting, often unpredictable to the novice, and fun to do. Raku fired items are not food safe. They are purely decorative. (Ceramicartsnetwork.org)